“Out of my way! I am a jet-propelled engine today and I can't stop for anyone!"
"Whatever's got into Thomas? He sounds like Gordon - and he's going as fast as Gordon as well!”
―Thomas rocketing past Percy

Rocket Power is a magazine story illustrated using photograph from the television series.

The engines often get tired of Gordon boasting about pulling the express, but Gordon takes no notice; he knows that his passengers are proud of him.

One morning, the Fat Controller tells Thomas to go to the docks and collect a jet engine and take it to the airfield. Thomas asks what a jet engine is and the Fat Controller explains that it speeds along by pushing hot air out of the back. Thomas puffs off happily and soon arrives at the docks. He has to wait while Cranky lowers the jet engine onto Thomas' truck. Thomas tells Cranky to hurry up. Cranky does not like being told what to do and, when the jet engine is loaded, he uses his hook to turn it on. The jet engine begins to whine and suddenly a burst of hot air bursts out of the back. The engine begins to move and soon it is rocketing Thomas down the line at top speed. Thomas' driver puts on the brakes, but it does no good. The jet engine goes faster and faster and there is nothing Thomas can do. The stationmaster calls ahead to the signalboxes and tells the signalmen to clear the line for Thomas.

Thomas flies by James, who cannot believe his eyes. Thomas is having a great time, he had never been so fast. He thunders down a hill and scares Henry, who is pulling a line of tankers. Poor Percy gets a fright too when Thomas overtakes him. Just then, Thomas sees Gordon on the track ahead. Thomas flies past him like a rocket. Gordon is so surprised, he cannot say anything at all. At last, the jet engine runs out of fuel and Thomas glides to a stop at the next station. Shortly, Gordon steams in and he claims not to have seen Thomas pass him.

That evening, James and Henry ask Thomas what it was like to travel faster than Gordon. Gordon snorts and declares that he is a steam engine, not a silly jet engine. James remarks that both Gordon and the jet engine are full of hot air.

Allicia Botti can be seen on a poster at Knapford. 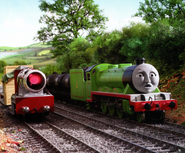 Add a photo to this gallery
Retrieved from "https://ttte.fandom.com/wiki/Rocket_Power?oldid=1662981"
*Disclosure: Some of the links above are affiliate links, meaning, at no additional cost to you, Fandom will earn a commission if you click through and make a purchase. Community content is available under CC-BY-SA unless otherwise noted.