Rolf's Castle is a small town and station on the Kirk Ronan Branch Line.

Roolwer, or Rolf, was Bishop of Sodor and Man between 1070 and 1079, and built himself a fortified residence here, from which the town gains its name. Rolf died in 1079 while on a visit to the Isle of Man, and was buried at Kirk Maughold. During the time of the resistance (1263-1404), Rolf's Castle, along with Brendam and Cronk, was part of the triangle that was usually occupied by invading Scottish, and later English, forces.

The Bishop’s house is now in Suddery, and Rolf‘s Castle, rebuilt in 1665 after being dismantled by Cromwellians during the Great Rebellion, is now a Conference Centre.

The original 1950 map of the Island of Sodor, showing Rolf's Castle as a station on the Main Line
Add a photo to this gallery

The junction before the station

The road crossing in the town

Bulgy at the station

Tidmouth Bay depicted as Rolf's Castle in Christmas in Wellsworth 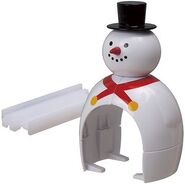