Rolling Around! is a magazine story.

Percy is shunting trucks in the main station yard when Thomas returns from his branch line. The passengers get off his train and amongst them are Stephen and Bridget. Lady Hatt has taken them shopping and they had stopped off at a toyshop. Stephen shows Thomas a bag full of marbles that their grandmother had bought them. Thomas does not know what they are. Bridget and Stephen explain that people roll a marble along the floor and then the other person has to try and hit it with one of theirs. Just then, some marbles topple onto the platform. The stationmaster steps on one and nearly falls over. Some porters chase the marbles and pick them all up. Percy has been watching everything and is relieved that the marbles did not roll under their wheels.

The next day, Thomas and Percy have an unusual job. They have to deliver an olden-day cannon and cannonballs to the new tourist attraction by the seaside. It is a full-size model of an old-fashioned pirate ship. A crane is waiting to lift the precious cargo onto Thomas and Percy's train. As a special treat, Lady Hatt brings Stephen and Bridget on Bertie so they can watch.

Percy chuffs slowly up behind Thomas, but he does not stop in time. Both engines are pulling a truck and the jolt makes a cannonball fall out of each one. The cannonballs both rumble down a slope. Luckily, Stephen, Bridget and Lady Hatt are safely clear of the commotion. Percy wonders how they can stop them. Suddenly, Thomas' cannonball bumps into Percy's and they come to a halt; just like a game of marbles. 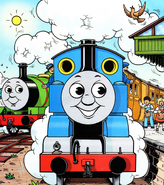 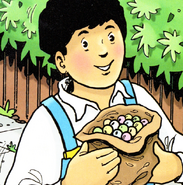 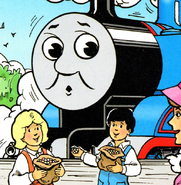 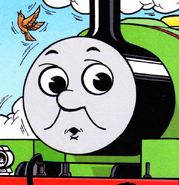 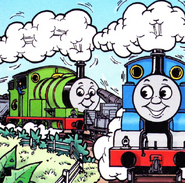 Add a photo to this gallery
Retrieved from "https://ttte.fandom.com/wiki/Rolling_Around!?oldid=1525117"
*Disclosure: Some of the links above are affiliate links, meaning, at no additional cost to you, Fandom will earn a commission if you click through and make a purchase. Community content is available under CC-BY-SA unless otherwise noted.