“Don't be silly, Percy! What would you do if you ran away?"
"Maybe he could get a job on a ghost train!”
―Thomas and Diesel

Runaway Percy! is a read and colour magazine story.

Percy is depressed. That day, he had been working with rude trucks in the pouring rain and Gordon had told him off for blowing his whistle too loud. Percy is so fed up, he even states that he sometimes wishes he could runaway. Diesel suggests that he runs away and become a ghost train, which puts Percy off the idea. The next day, Percy is trying to get his work done quickly. He is puffing so loudly that he does not hear his driver telling him to slow down. In the end, the driver takes matters into his own hands and activates the brakes. The brakes fail and Percy cannot stop. Percy puffs out of control through the Main Station. Thomas thinks Percy is running away and tells the Fat Controller to stop him. Shortly, Percy approaches a corner. He is going so fast that he flies straight off the rails and head-first into a ditch. Soon, the rescue service arrives and Percy explains that he was not running away. Sir Topham Hatt kindly sends him to be repaired and tells him to have a rest in the shed. Percy decides that, although running away may sound exciting, there really is no place like home. 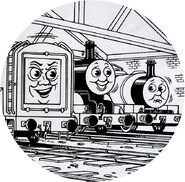 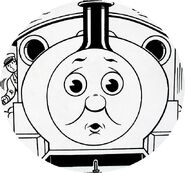 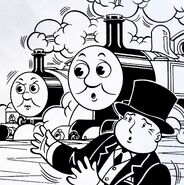 Percy, Thomas, and the Fat Controller 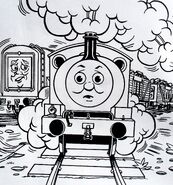 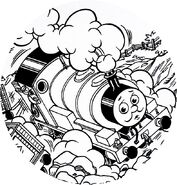 Add a photo to this gallery
Retrieved from "https://ttte.fandom.com/wiki/Runaway_Percy!?oldid=1335649"
*Disclosure: Some of the links above are affiliate links, meaning, at no additional cost to you, Fandom will earn a commission if you click through and make a purchase. Community content is available under CC-BY-SA unless otherwise noted.