The Ghost Engine and the Little Engine

Rusty's Ghost Engine was a narrow gauge saddletank engine who supposedly worked on the Skarloey Railway.

According to legend, the engine was returning home one misty night. As the engine was travelling across the Old Iron Bridge, he suddenly lost control and fell off the bridge, plunging into the Cattle Creek ravine below. No one was able to find his remains. However, in the light of the full moon, several workmen claimed to have seen his ghost repeatedly trying to cross the bridge, only to disappear half way every time.

Rusty told the story to Duncan, after Duncan teased Peter Sam for allowing his trucks to derail and fall into the ravine. At first Duncan did not believe the story, but the next day Peter Sam and Duncan's crew arranged a plan to teach him a lesson.

While crossing the bridge during a full moon, the crew used fireflies to help form the ghostly appearance of an engine and secretly threw a large rock from his cab into the ravine. Duncan believed that the bridge was haunted and the engine was trying to cross the bridge at the same time as him. This frightened Duncan, and he quickly ran back to the safety of his shed[1].

In the magazine story, Creepy Cutting, the ghost engine was mentioned by Skarloey who suspected that he was haunting Echo Pass.

Basis
The Ghost Engine is based on the Talyllyn Railway's "Talyllyn", a Fletcher Jennings Class C 0-4-2 tank locomotive that Skarloey is also based on.

Talyllyn
Add a photo to this gallery

Livery
Rusty's Ghost Engine appeared to be painted red with white lining prior to his demise, while the ghost apparition was bluish white all over. 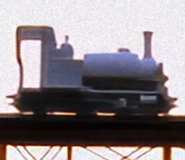 The Ghost Engine's apparition
Add a photo to this gallery

"A long time ago, a little engine was returning home. It was a misty, moonlit night. As the engine crossed the old iron bridge, he suddenly lost control and plunged over the side into the swamps below. He was never found again. But many a workman will tell you that when the moon is full, they have seen the little engine trying to get home... but he never reaches the other side."

The Ghost Engine on the Old Iron Bridge

The engine falls into the ravine

The fireflies' formation
Add a photo to this gallery 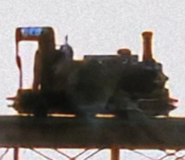 Skarloey Railway
* RWS only | ** T&F only
Retrieved from "https://ttte.fandom.com/wiki/Rusty%27s_Ghost_Engine?oldid=1728375"
*Disclosure: Some of the links above are affiliate links, meaning, at no additional cost to you, Fandom will earn a commission if you click through and make a purchase. Community content is available under CC-BY-SA unless otherwise noted.