“I'm doing my best!"
"You're a disgrace to diesels!”
―Rusty and Diesel

Rusty's Rescue! is a magazine story.

Henry has collected timber from the forest on his log car. Later, he passes through the Transfer Yards where Diesel pulls up with sleepers and track for the mountain railway. Rusty comes to fetch Diesel's load. Diesel is being rude and remarks that if Rusty was bigger, he would be stronger. Rusty insists that he is doing his best, but Diesel states that he is a disgrace to Diesels. After Diesel leaves, Henry tells Rusty to take no notice of Diesel and it is time he was taught a lesson. Luckily, Henry has an idea.

The next day, Henry arrives at the Transfer Yards with his log car again. Diesel arrives with more materials for Rusty. Henry brakes behind Diesel and jolts his brakes making a log fall off his car and onto the line. Next, Henry steams around the loop line and stops in front of Diesel. Now Diesel is unable to go forwards or backwards. Diesel is cross; unless Henry moves the log he cannot move. Henry suggests that Diesel kindly asks Rusty to move the log. Diesel does so and Rusty pushes the log aside. Diesel has no choice but to admit that Rusty may be small, but he is also strong. 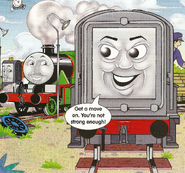 Add a photo to this gallery
Retrieved from "https://ttte.fandom.com/wiki/Rusty%27s_Rescue!?oldid=1658408"
*Disclosure: Some of the links above are affiliate links, meaning, at no additional cost to you, Fandom will earn a commission if you click through and make a purchase. Community content is available under CC-BY-SA unless otherwise noted.