Rusty is asked to help out at the harbour, but James does not think that the "rusting" old diesel could prove to be very useful. James has to pull empty trucks to the windmill to be loaded with flour. After collecting the flour, he heads back to the harbour, but the trucks surge forward and James comes off the rails on a bendy line. Flour goes everywhere and Rusty pulls James back to the sheds, where everyone laughs at him. 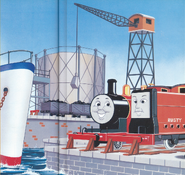 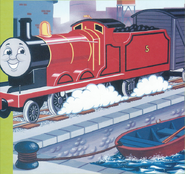 Add a photo to this gallery
Retrieved from "https://ttte.fandom.com/wiki/Rusty%27s_Revenge?oldid=1740776"
*Disclosure: Some of the links above are affiliate links, meaning, at no additional cost to you, Fandom will earn a commission if you click through and make a purchase. Community content is available under CC-BY-SA unless otherwise noted.