Rusty, re-titled Rusty the Little Diesel Engine in 2011 and Rusty gets the Job Done in 2015, is the thirty-eighth book in the My Thomas Story Library series.

Rusty is concerned over Skarloey and Rheneas' mountain line. The line is in bad condition and has to be shut down. The Fat Controller allows them to repair it in two weeks and the engines gain Elizabeth's help. 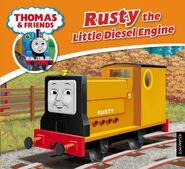 2015 cover
Add a photo to this gallery
Retrieved from "https://ttte.fandom.com/wiki/Rusty_(Story_Library_Book)?oldid=1783558"
*Disclosure: Some of the links above are affiliate links, meaning, at no additional cost to you, Fandom will earn a commission if you click through and make a purchase. Community content is available under CC-BY-SA unless otherwise noted.