“AAAAAH!”
―Salty sliding along the rails

Salty loves working at Brendam Docks and never wants to work anywhere else. Suddenly, Salty's engine starts to make spluttering sounds. Cranky thinks Salty should be checked over at the Sodor Dieselworks, but Salty refuses.

At the Dieselworks, Salty asks Den and Dart to fix him as fast as they can. Soon, Salty is fixed, but as he races out of the Dieselworks, he collides with some oil trucks. Salty is covered in thick, black oil, but insists that he is okay and races away to the docks.

When Salty arrives at the docks, he starts to slide about due to the oil on him dripping onto the tracks. Salty slides right into some trucks of confetti. Porter rushes over to shunt the trucks from the other side so that Salty can come to a stop. The Fat Controller tells Salty that it is time for him to go. Salty is very sad and tells Sir Topham that he likes working at the docks. Much to Salty's relief, the Fat Controller explains that he only wants Salty to go to the washdown; he thinks that Salty and Porter make a great team. Salty asks if Porter can accompany him to the wash-down to sand the rails. 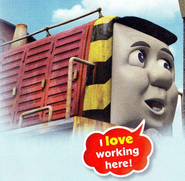 Add a photo to this gallery
Retrieved from "https://ttte.fandom.com/wiki/Salty%27s_New_Friend?oldid=1690542"
Community content is available under CC-BY-SA unless otherwise noted.