Sand Express is a magazine story. It was republished in 2013 as The Seaside Special and then again in 2015 under its original title.

One bright day, Gordon is pulling the Seaside Express full of passengers to the beach. When Gordon arrives at the beach, he sees lots of children playing in the sand. After a while, Gordon has to rush off to fetch even more passengers.

That night, a storm sweeps across the Island. The next morning, Gordon rolls into the yard and sees branches and rubbish scattered all around. His driver then informs him that the Seaside Express has been cancelled for the day. Instead of holidaymakers, Gordon has to take workmen to the beach to help clear it up. As the clean-up began, Lorry 1 and 2 arrive with fresh sand for Terence to spread along the seafront. The sky turns blue, but Gordon knows that it will be days until the beach is ready for the holidaymakers again.

Gordon decides to take the beach to the children. He fetches a flatbed and Harvey stacks railway sleepers around its edge. Harvey then uses his grabber to spread sand from Lorry 1 all over the flatbed to make a sandpit. The Fat Controller then phones Radio Sodor to tell everyone about it.

Gordon sets off along the Main Line. He stops off at each station where lots of children are waiting. The children eagerly clamber onto the flatbed and they agree that it is just like being on the beach. The stationmaster even gives the children some ice cream. Gordon vows to steam all over the Island with his "Seaside Sand Express" until the beach is back open. 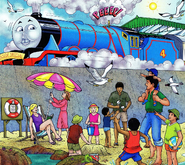 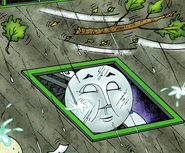 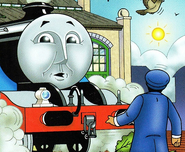 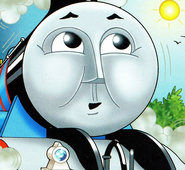 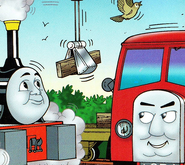 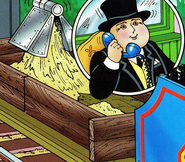 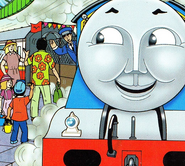 Add a photo to this gallery
Retrieved from "https://ttte.fandom.com/wiki/Sand_Express?oldid=1363862"
*Disclosure: Some of the links above are affiliate links, meaning, at no additional cost to you, Fandom will earn a commission if you click through and make a purchase. Community content is available under CC-BY-SA unless otherwise noted.