Sandblasted! is a magazine story.

One day, two men arrive at the main station in a lorry. The Fat Controller greets them and they ask if the sand has arrived yet. At that moment, Thomas puffs in with the bags of sand in his truck. A porter wheels the sand sacks to the front of the station. The Fat Controller watches with interest as the men load the sand into a mixer and one of them puts on a special helmet. Then, the man with the helmet starts to fire a powerful jet of sand at the station's old stonework.

The Fat Controller rushes to see the mess on platform one and apologises to Thomas and tells him to go and have a wash. Unfortunately, Thomas is all jammed up with sand. The Fat Controller then decides to stop the work and asks the men to follow him with their equipment.

Minutes later, the sandblasters give Thomas a blast of "Air Only" which they think should get rid of Thomas' sand. When it is finished, Thomas opens his eyes and feels as good as new. The Fat Controller asks Thomas to keep it a secret because the other engines are sure to be jealous. Thomas agrees and says that he's had a blast. 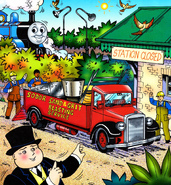 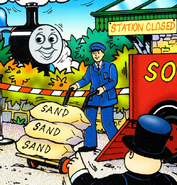 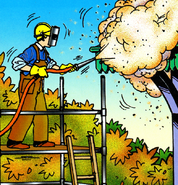 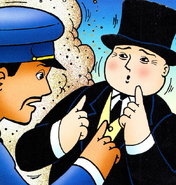 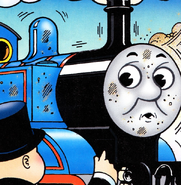 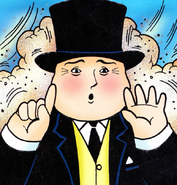 Add a photo to this gallery
Retrieved from "https://ttte.fandom.com/wiki/Sandblasted!?oldid=1499306"
Community content is available under CC-BY-SA unless otherwise noted.