Saved Again/
Out of Control

Saved Again, later retitled Out of Control is a magazine story.

A train of scrap is to be taken to the scrapyards and Edward is the only engine available to take it. On the way, a clumsy signalman accidentally switches Edward onto an old branch line. Edward breaks through a boarded up tunnel and comes to a stop at the Scrapyards with a jammed wheel. His driver goes for help, but the scrapman arrives and thinks Edward is there for scrapping. Luckily, Trevor and Jem Cole arrive and stop him in time. Edward is grateful that Trevor returned the favour of saving him from scrap. 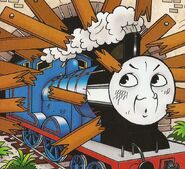 Add a photo to this gallery
Retrieved from "https://ttte.fandom.com/wiki/Saved_Again?oldid=1732590"
*Disclosure: Some of the links above are affiliate links, meaning, at no additional cost to you, Fandom will earn a commission if you click through and make a purchase. Community content is available under CC-BY-SA unless otherwise noted.