Scruff works with Whiff at the Waste Dump collecting rubbish trucks. When the Fat Controller sees how rusty and dirty Scruff looks, he insists that he goes straight to the Steamworks to be repainted. Soon the other engines are telling Scruff how smart he looks, so he decides he doesn't want to work at the dirty Waste Dump anymore. He tries asking Percy, Thomas and Gordon if he can do their jobs instead, but eventually Scruff realises that the only way to be Really Useful is to do his own job at the Waste Dump, even if it means getting really dirty.

Thomas, the small, mischievous engine live with all of his friends on the Island of Sodor. They all happily work together on the railway. However, not everything goes well all the time and the little blue engine often has to face a lot of unexpected problems. In the end, they can usually congratulate each other on being Really Useful Engines. 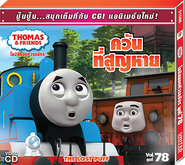 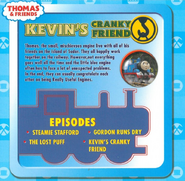 Croatian DVD
Add a photo to this gallery
Retrieved from "https://ttte.fandom.com/wiki/Scruff%27s_Makeover_(Chinese_DVD)?oldid=1842877"
*Disclosure: Some of the links above are affiliate links, meaning, at no additional cost to you, Fandom will earn a commission if you click through and make a purchase. Community content is available under CC-BY-SA unless otherwise noted.