Seaside Search! is a magazine story.

One sunny day, Thomas excitedly pulls into the main station. He is pulling a seaside special and soon his faithful carriages are packed. It is a special trip that has been arranged by the Fat Controller exclusively for his railway staff and their families. Lady Hatt has made a picnic and Stephen and Bridget have helped to organise it too.

Thomas happily steams along the coastal line and when he reaches the seaside, everyone waves goodbye to him. Thomas' guard gets off the train too; he is in charge of the children's beach games. Thomas jokingly tells the guard that he will not have to use his whistle for a while, but he does. Every time the children are to gather round and play a new game, he blows a loud whistle. They start by playing catch with a beach ball, then beach cricket and finally, volleyball. Soon, everyone is very hungry and they enjoy Lady Hatt's picnic. It is nearly time for Thomas to pick them up, but there is just enough time for one more game. Unfortunately, the guard cannot think of another game.

Thomas returns to the seaside early, so that he can have a drink of water before they start the return journey. Suddenly, the guard looks worried; he has lost his whistle, but this gives him a clever idea. He decides that their last game will be entitled "Where's the Whistle?" in which the children have to hunt for the missing whistle. Soon, a little boy finds the whistle in the sand and declares that "Where's the Whistle?" has been his favourite game. The guard agrees and is delighted to be reunited with his whistle. 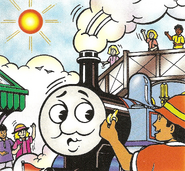 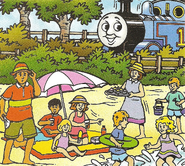 Add a photo to this gallery
Retrieved from "https://ttte.fandom.com/wiki/Seaside_Search!?oldid=993852"
*Disclosure: Some of the links above are affiliate links, meaning, at no additional cost to you, Fandom will earn a commission if you click through and make a purchase. Community content is available under CC-BY-SA unless otherwise noted.