Season 16 was a Digital Download release available to view on Amazon Prime Video and iTunes that featured all episodes from the sixteenth series in their original PBS broadcast. Each block contained two episodes, a song & a Down at the Station segment. The digital download was discontinued during the summer of 2021.

Thomas is back with another exciting series. We catch up with Thomas and his friends and some of the newer characters from series 15 such as Fiery Flynn and Den and Dart. There is also a return of the narrow gauge engines back in full glorious CGI and working hard as a new location in the hills 'The Blue Mountain Quarry'. 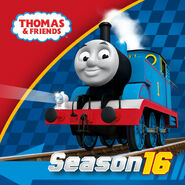