Season 17 was a Digital Download release available to view on Amazon Prime Video and iTunes that featured all the episodes from the seventeenth series in their original PBS broadcast. Each block contained two episodes, a song and a Mr. Perkins' Railway segment. The digital download was discontinued during the summer of 2021.

Thomas is back and it's bigger and better than ever. Thomas returns with classic stories full of fun, excitement and humor. We catch up with Thomas and his friends as well as some of the newer characters like Stephen and Millie. Also the Earl Of Sodor an explorer returning to the island. 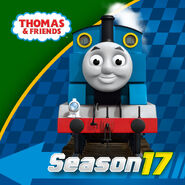