Season 18 was a Digital Download release available to view on Amazon Prime Video and iTunes that featured 20 episodes from the eighteenth series in their original PBS broadcast format. Each block contained a song and a Mr. Perkins' Railway segment. The digital download was discontinued during the summer of 2021.

Thomas is back and it's bigger and better than ever. We catch up with Thomas and his friends as well as some of the newer characters from series 18 like Gator and Marion. Timothy works with Bill and Ben at the China Clay Pits and Reg the scrapyard crane has fun at the Scrapyard. 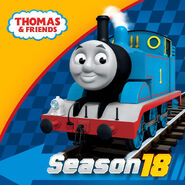