Season 19 was a digital release available to view on Amazon Prime Video, iTunes, and Google Play that featured six eighteenth series episodes and nineteen nineteenth series episodes in thirteen 26-minute blocks, as per their original PBS broadcast format. Each block contained one or two episodes, a music video and a Mr. Perkins' Railway segment (blocks 1-10) or The Earl's Quiz and Learn with Thomas segments (blocks 11-13). The digital release was discontinued during the summer of 2021.

Thomas is back and it's bigger and better than ever. 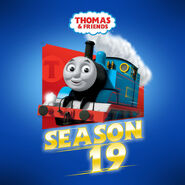 NBC Universal Television Distribution logo shown at the end of each block
*Disclosure: Some of the links above are affiliate links, meaning, at no additional cost to you, Fandom will earn a commission if you click through and make a purchase. Community content is available under CC-BY-SA unless otherwise noted.
Advertisement