Season 20 is a Digital Download release available to view on Amazon Instant video and iTunes featuring 20 episodes from the twentieth series. Each block contains a music video, and some features a The Earl's Quiz and Learn with Thomas segment.

Thomas & Friends has sparked the imagination of young children for generations. The series features Thomas, a true blue engine friend who proudly wears the "Number 1" on his side, and a cast of track stars. 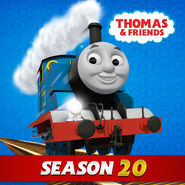