“Whoever thought we'd see sheep catching The Express!”
―A passenger

Seeing Sheep! is a magazine story.

One day, Thomas has to perform an emergency stop because of some cows that have wandered onto the line. This has caused the passengers to get angry for being late. The following day, Thomas is determined to be on time, but he soon has to make another emergency stop when some sheep wander onto the line. Despite an apology from Thomas' crew and the Fat Controller, the passengers are still furious. So to keep the passengers happy, Sir Topham gives them a free ride on Gordon's express the following morning. Thomas pulls into the station with a livestock wagon to collect some sheep. But, whilst boarding, some of the sheep escape and run around the station. A few even board Gordon's express carriages. The staff expect the passengers to be angry, but they are laughing at the thought of sheep wanting to catch the express. 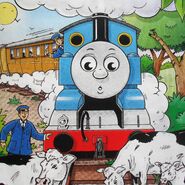 Thomas and some cows 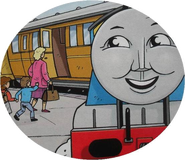 Add a photo to this gallery
Retrieved from "https://ttte.fandom.com/wiki/Seeing_Sheep!?oldid=1248133"
*Disclosure: Some of the links above are affiliate links, meaning, at no additional cost to you, Fandom will earn a commission if you click through and make a purchase. Community content is available under CC-BY-SA unless otherwise noted.