“Smoke and fire! This isn't my branch line at all!”
―Thomas

Thomas the Tank Engine and Friends 219

Seeing Signals! is a magazine story.

A thick mist has hung over the Island of Sodor for days. The engines find work very difficult as a result. Thomas leaves the yard with a goods train. He knows he must not go fast otherwise he could miss a signal.

Soon, Thomas approaches a signalbox which he can barely see. He whistles to let the signalman know he is coming. The signalman always waves to Thomas out of the window, but he knows that there is no chance he will see him today.

Thomas is to deliver the trucks to Wellsworth, but as he steams on his way, the mist suddenly clears. Thomas gasps; he is not on his branch line at all. Thomas is heading straight towards some buffers. The driver urgently shuts of steam. Luckily, Thomas' emergency stop does the trick and he stops just in time.

Thomas backs to the signalbox to find out why the points were not correctly set. When he arrives at the signalbox, his crew hear someone call for help. Thomas' driver goes to investigate and finds the signalman sat below the steps leading up to the signalbox. The signalman explains that he had slipped just before Thomas passed by the first time and that the telephone in the signalbox had stopped working. The signalman had gone outside to check the phone line when he stumbled and sprained his ankle meaning that he could not change the points.

Luckily, the signalman's ankle is not badly sprained and he is soon back at work. When Thomas passes the signalbox again, the signalman waves as normal. Thomas thinks that is the best signal of all. 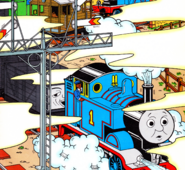 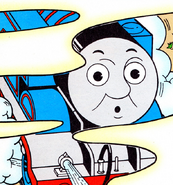 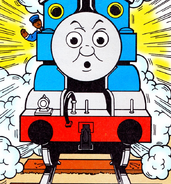 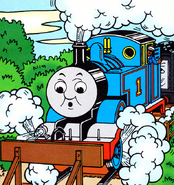 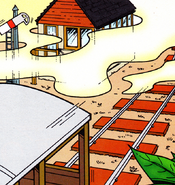 Add a photo to this gallery
Retrieved from "https://ttte.fandom.com/wiki/Seeing_Signals!?oldid=1237467"
Community content is available under CC-BY-SA unless otherwise noted.