The second series of Thomas & Friends premiered on 24th September 1986 in the UK. Ringo Starr narrated all twenty-six episodes in the UK as well as seventeen of them on Shining Time Station, with George Carlin later re-narrating all of the episodes for the US.

The majority of the stories were originally written by the Reverend W. Awdry. However, Christopher Awdry was commissioned to write a new Railway Series book as source material for the second series. Two stories from More About Thomas the Tank Engine provided additional roles for Bertie the bus and Harold the helicopter. The episode Thomas and the Missing Christmas Tree was a one-off story written by Christopher Awdry. According to the original end credits for Thomas and Trevor, the episode is "based on the story by Christopher Awdry from original material by Britt Allcroft and David Mitton".

According to Robert Gauld-Galliers, "Gordon Goes Foreign" was originally intended for production, but it was not filmed because its production costs would have gone over-budget. Another episode called The Missing Coach, based on a story from The Twin Engines was due to be filmed. The model crew had gone as far as filming scenes on the Tidmouth Station set with Thomas arriving at the station before Britt Allcroft decided to cut the episode, citing a lack of action and a storyline which was too convoluted for young viewers to follow, so it was replaced by Thomas, Percy and The Coal. "Percy's Promise" and "Double Header" were originally considered but were dropped and replaced by Christopher Awdry's new stories.

(Note: * means that an episode was not narrated by Ringo Starr in the US and was only narrated by George Carlin in the US).

(Note: ** means that an episode was narrated by George Carlin in the US but was never re-aired on Shining Time Station and was only released on VHS or DVD.) 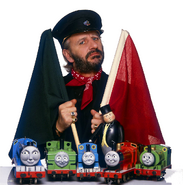 Add a photo to this gallery
Retrieved from "https://ttte.fandom.com/wiki/Series_2?oldid=1705608"
Community content is available under CC-BY-SA unless otherwise noted.