Thomas the Tank Engine Wikia
Register
Don't have an account?
Sign In
Advertisement
in: Other railways, Electric locomotives, Real engines,
and 8 more
English

Settebello is a famous Italian high-speed express train, whom Thomas once met during his visit to Italy.

When Thomas travelled to Italy, he met a large green engine. He directed Thomas to deliver his passengers at Pompeii. He explained that Pompeii was an ancient city, which was buried under rock and ash when a volcano, Mount Vesuvius, erupted 2000 years ago. Pompeii is now a famous tourist attraction and he says that travelling to Pompeii for some people is like travelling back in time.

Settebello is based on the FS Class ETR 300 and is named after the real high-speed express train of the same name. Three examples were built between 1952 and 1959 and provided a high-speed luxury train service between Milan and Rome. They have since been withdrawn from service and one is now preserved. 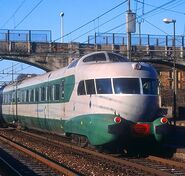 Settebello is painted cream with green window surrounds and a green skirting in a similar style to the real Settebello.

Storyboard artwork of Settebello and Thomas

Italy
International Characters
* RWS only | ** T&F only | ✦ Changed location
Deutsch Polski Русский
*Disclosure: Some of the links above are affiliate links, meaning, at no additional cost to you, Fandom will earn a commission if you click through and make a purchase. Community content is available under CC-BY-SA unless otherwise noted.
Advertisement