Shady Business! is a magazine story.

Sodor is in the middle of a scorching heatwave. Percy is certainly feeling the heat as he collects his second load of trucks from the main station yard. Percy clatters past Diesel who is being hosed down. Diesel remarks that if Percy was not so small, he would be able to pull more and finish his jobs early, too. Percy takes little notice; he knows he is a really useful engine. It is much later on before it is Percy's turn to be hosed down.

The next day, Percy decides to work extra hard so that he can be hosed down before Diesel. Unfortunately, Percy's plan is scuppered by workmen carrying out work to replace some rails that have been buckled by the sun. Both Percy's line and the line next to him are blocked. Percy has to stand in the baking hot sun while his driver and fireman sit in the shade of a nearby tree. Percy wishes he had some shade too.

Presently, Diesel oils up on the next line. He has to stop too which he does not like one bit. Then, clever Percy has a plan and reverses alongside Diesel. A shadow from Diesel is cast over Percy who now has his shade. Diesel on the other hand is not so lucky with the sun beating down and no shade at all. 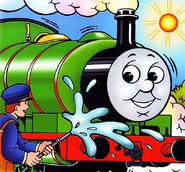 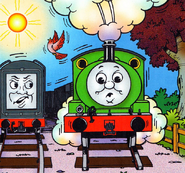 Add a photo to this gallery
Retrieved from "https://ttte.fandom.com/wiki/Shady_Business!?oldid=1237114"
Community content is available under CC-BY-SA unless otherwise noted.