“Shake! Shake! Make me quake!"
"Make me quake until I shake!”
―Dash and Bash going over the bridge in Misty Island Rescue

The Shake Shake Bridge is a bridge that runs over The Logging Pond on Misty Island. Its name comes from the fact that, when an engine crosses it, it shakes violently.

Thomas crossing the bridge for the first time

Edward on the bridge

Bertie stuck on the bridge

Toby and Rheneas on the bridge 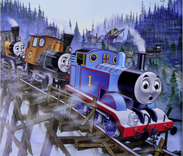 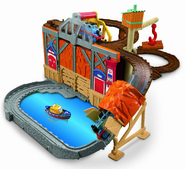 Capsule Plarail
Add a photo to this gallery
Misty Island
* RWS only | ** T&F only
Retrieved from "https://ttte.fandom.com/wiki/Shake_Shake_Bridge?oldid=1739240"
*Disclosure: Some of the links above are affiliate links, meaning, at no additional cost to you, Fandom will earn a commission if you click through and make a purchase. Community content is available under CC-BY-SA unless otherwise noted.