Shane Dooiney is a narrow gauge mountain-climbing engine working on the Culdee Fell Railway. He is named after a Sudrian mountain, Shane Dooiney. Like the other mountain engines, he has his own coach used for passenger services.

Shane Dooiney was built at the Swiss Locomotive and Machine Works in Winterthur, Switzerland in 1900. He arrived on Sodor along with Godred, Ernest, Wilfred and Culdee in time for the railway's Inspection in March 1900. Following Godred's accident shortly after opening, Shane Dooiney and the three other engines worked the line successfully for 60 years. They were carefully maintained and sent back, in rotation, to the builders in Switzerland for overhaul.

By 1960/1, the four engines were ageing and the crunch came when it became apparent that both Culdee and Shane Dooiney would need heavy overhauls in the near future, so three new engines were ordered. When Alaric arrived in May 1962, Shane Dooiney was freed up to be sent away to Switzerland for his major overhaul. He was the last engine to make the journey from Sodor to Switzerland; from then on, all subsequent overhauls took place at the NWR Works at Crovan's Gate.

Not much is known about Shane Dooiney's personality, though it is assumed that he is a hard-worker, careful and cautious like the other mountain engines.

Shane Dooiney is based on the Snowdon Mountain Railway's No. 5 Moel Siabod. 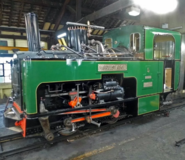 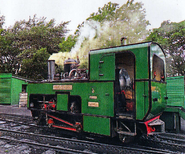 Shane Dooiney is painted purple with orange lining. The number "5" is painted on the sides and back of his cab in yellow and he has red nameplates, with his name in gold on the sides of his tanks.

Culdee Fell Railway
Español עברית Polski Русский
*Disclosure: Some of the links above are affiliate links, meaning, at no additional cost to you, Fandom will earn a commission if you click through and make a purchase. Community content is available under CC-BY-SA unless otherwise noted.
Advertisement