Thomas the Tank Engine Wikia
Register
Don't have an account?
Sign In
Advertisement
in: Steam locomotives, Annuals and Magazines, Other Sudrian railways,
and 7 more
English

“I must say the Sodor railway is one big scenic railway, but I'm sure I'll have plenty of passengers all the same!”
―Sidney

Sidney is a small 0-6-0 saddle tank engine who runs a narrow gauge branch line near Duck's branch line by the sea.

When Sidney first arrived on Sodor, Duck had to collect the new engine from the Docks and deliver him to a Scenic Railway on his goods train. Sidney started to boast about the view that his railway had to offer, and Duck argued with him saying that his branch line was more picturesque. When he managed to show Sidney all the splendid sites that Sodor had to offer, Sidney even admitted that maybe he was wrong about whose line would have better views.

Duck promised Sidney that he would bring plenty of passengers to him on his new railway at Bay View Holiday Park. Later, Sidney was relocated to another narrow gauge branch line near the seaside. He met up with Duck again, and they've been firm friends ever since.

A few months later, to celebrate the Tidmouth Pier's 100th anniversary, a short temporary track is laid there, and Sidney is brought to run it.

Sidney can be rather boastful, single-minded, and above himself. However, this attitude changed when he befriended Duck. Sidney enjoys chuffing around the seaside, pulling passengers to the funfair and back.

Sidney appears to be a freelance design. However, he does loosely resemble Peter Sam's basis, Edward Thomas. While in other illustrations, Sidney resembles a Quarry Hunslet saddletank.

Sidney is painted baby blue with yellow lining. He also has a red and yellow nameplate with black lettering on either side of his tanks. His dome and safety valves are also painted yellow, and his wheels are painted black. He has gold on his funnel. 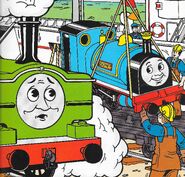 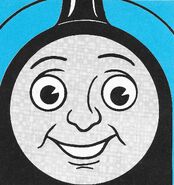 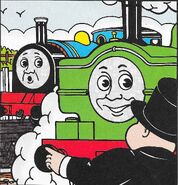 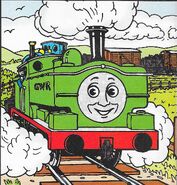 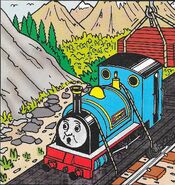 Magazines & Annuals
Русский
*Disclosure: Some of the links above are affiliate links, meaning, at no additional cost to you, Fandom will earn a commission if you click through and make a purchase. Community content is available under CC-BY-SA unless otherwise noted.
Advertisement