“Be careful what you say in front of the passengers. We can't be worrying them with Red Indians and grizzly bears!”
―the Fat Controller

Thomas the Tank Engine and Friends 254

Silly Skarloey! is a read and colour magazine story.

One day, Skarloey is moaning about doing boring jobs like shunting trucks all day, so much so that Gordon becomes fed up with him. He tells Skarloey to imagine doing something more interesting, which is exactly what Skarloey does. He imagines that he is in the Wild West guarding trucks of gold dust. Skarloey is pleased with himself; there is no limit to the adventures he can have now. He cannot wait to do his next job.

A short while later, Skarloey is taking passengers to Wellsworth. His driver tells him to slow down, but Skarloey informs him that he is being chased by Red Indians and in his imagination, he is.

Later on, Skarloey limps back to the main station with a faulty piston. The Fat Controller asks if he has had any trouble. Skarloey tells him that he has only had a bit of bother with grizzly bears. The Fat Controller has heard about his stories and reminds him not to say things like that in front of the passengers as they do not need to be worrying about grizzly bears and Red Indians.

The next day, Skarloey is waiting to leave Wellsworth Station when a party of schoolchildren hold him up. He has to wait for the teacher to ferry them onto the train. The teacher tells the children to "form a crocodile" which is a way of getting the playful kids to stand in a straight line. Skarloey wonders what the hold-up is. His driver explains that Miss Brown is having trouble getting her children to form a crocodile. 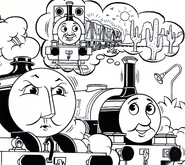 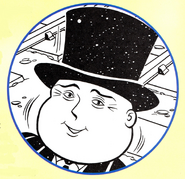 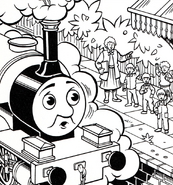 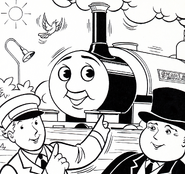 Add a photo to this gallery
Retrieved from "https://ttte.fandom.com/wiki/Silly_Skarloey!?oldid=1227480"
Community content is available under CC-BY-SA unless otherwise noted.