Sixteen was a troublesome industrial Austerity saddle tank engine who used to work at a Steelworks on The Mainland.

Sixteen lived at a steelworks on the Mainland, with several other engines. He spent all day shunting trucks to a place called the "tip". Engines were not allowed to travel along the track on the tip itself, as it was not firm enough to take their weight. Sixteen thought he knew better and often tried to pass the "DANGER" board without success.

One day, however, Sixteen took advantage of damp conditions and told the trucks to slide him past the warning notice. His fireman was told to reverse him, but before he could do so, the rails gave way and Sixteen tipped off the rails and rolled over onto the ground. He was eventually rescued but not repaired and sent to the sheds in disgrace where he remained in storage. He was eventually saved and taken to a heritage railway.

Sixteen was a naughty, careless, arrogant and awkward engine. He refused to take anyone's advice and it is also implied that he grew bored of his surroundings and was curious about the outside. After his accident, Wilbert has said that he hopes Sixteen has learned his lesson after being restored and given a fresh start in preservation.

Sixteen is based on a Hunslet Austerity WD 0-6-0ST. Wilbert and the Austerity Engine are other members of this class. Other members of this class were featured in Thomas and the U.K. Trip and the Down at the Station segments. Sixteen's livery bears a striking resemblance to a member of this class, 3823 "Warrior" which worked at the National Coal Board. It is possible that Sixteen could be based on the Wemyss Private Railway's No. 16. The locomotive has the basis, wears a similar livery to him and while there is no record of a steelworks on the railway, the locomotive had replaced an engine (ironically carrying the same number) that had an accident similar to Sixteen's. Hornby has created a model of this locomotive.

Sixteen is painted mahogany with yellow lining, the number 16 he is named after on his saddle tank and black and yellow hazard stripes on his bufferbeams.

Sixteen derailed
Add a photo to this gallery 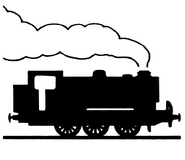 Silhouette
Add a photo to this gallery

ERTL 2002 packaging
Add a photo to this gallery
United Kingdom
* RWS only | ** T&F only
Retrieved from "https://ttte.fandom.com/wiki/Sixteen?oldid=1775432"
*Disclosure: Some of the links above are affiliate links, meaning, at no additional cost to you, Fandom will earn a commission if you click through and make a purchase. Community content is available under CC-BY-SA unless otherwise noted.