Skarloey Gets a Scare!

Skarloey is unfortunate enough to have a rather forgetful driver. One day, he loses his tea mug, his sandwiches, and his torch. In the shed that night, he hears loud rustling noises around him. A policeman comes the next morning to investigate these mysteries, but finds nothing. The next night, Skarloey hears the noises again. Next morning, all the mysteries are solved; the tea mug is in a toolbox, the torch is beside the telephone, and the sandwiches had been eaten by a hedgehog and its family in the shed; they had been making the rustling noises. 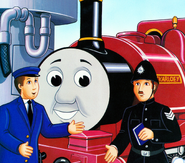 Add a photo to this gallery
Retrieved from "https://ttte.fandom.com/wiki/Skarloey_Gets_a_Scare!?oldid=1742379"
*Disclosure: Some of the links above are affiliate links, meaning, at no additional cost to you, Fandom will earn a commission if you click through and make a purchase. Community content is available under CC-BY-SA unless otherwise noted.