“I'm not much use as a toboggan!”
―Thomas

Slide and Ride is a magazine story.

Whilst clearing snow, Thomas sees children whizzing down a hill on toboggans. He is slightly jealous; he thinks tobogganing is the easiest way to travel. After a while, it is time for Thomas to take his branch line train. At the station, the stationmaster is helping his wife and two children onto the train; they are going shopping for a toboggan. When Thomas returns to pick up the passengers from the shopping centre, the stationmaster's children (Adam and Debbie) are upset - all the toboggans have sold out. However, the stationmaster promises to make the children a toboggan.

Shortly, Thomas rolls over to the water tower. Suddenly, his wheels begin to skid until he bangs into the buffers. Luckily, Annie and Clarabel are empty and no one is hurt. The stationmaster runs quickly across and Thomas remarks that he would make a useless toboggan, which gives the stationmaster an idea.

Next day, Thomas sees Adam and Debbie again. They are sliding down a snowy slope on a home-made toboggan in the shape of Thomas. All of Adam and Debbie's friends want an engine toboggan of their own, but the stationmaster is far too busy to make any more. Fortunately, Thomas has an idea which he shares with the Fat Controller, who rings the Sodor Toy Factory. Soon, Thomas is delivering a trainload of engine toboggans to all the toyshops on Sodor. They are a great success and sell out fast. 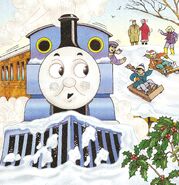 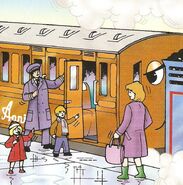 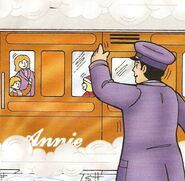 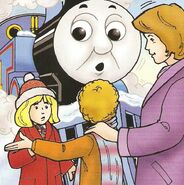 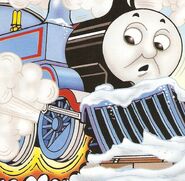 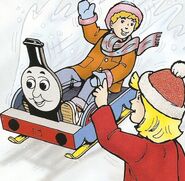 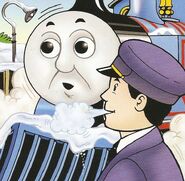 Add a photo to this gallery
Retrieved from "https://ttte.fandom.com/wiki/Slide_and_Ride?oldid=1953475"
*Disclosure: Some of the links above are affiliate links, meaning, at no additional cost to you, Fandom will earn a commission if you click through and make a purchase. Community content is available under CC-BY-SA unless otherwise noted.