Snake's Alive! is a magazine story.

One morning, Percy and Fergus are collecting items from an old museum and taking them to a larger building nearby. Unfortunately, Fergus is not used to Percy's teasing ways. Percy shouts out to warn Fergus about a "snake." Fergus looks round and spots a curly shape near some items from the museum beside the tracks. Fergus lets out a loud cry which causes the museum manager to come running up. The manager inspects the "snake" and Fergus is extremely shocked when the manager picks it up and begins to blow it. The manager explains that it is not a snake at all; it's a musical instrument known as a serpent. Percy chuckles, but Fergus is left feeling very foolish.

A few days later, Fergus is asked to shunt trucks at the Harbour Yard. He watches as Cranky starts to unload a ship. Suddenly, a crate swings out of control, hits the side of a truck and is split open. Percy arrives to see people running around and shouting and is very confused. Fergus explains that a snake has escaped from a crate and everyone is trying to find it. Percy thinks that Fergus is trying to trick him and ignores Fergus' warning. Suddenly, Percy spots the snake slithering towards him. Startled, Percy shoots forwards and bangs into some buffers. Then, a ranger from the Sodor Wildlife Park arrives to recapture the harmless snake. Percy admits that he deserved to be tricked and takes the snake to its new home at the Wildlife Park. 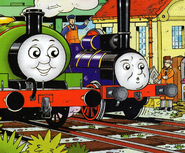 Add a photo to this gallery
Retrieved from "https://ttte.fandom.com/wiki/Snake%27s_Alive!?oldid=1393118"
*Disclosure: Some of the links above are affiliate links, meaning, at no additional cost to you, Fandom will earn a commission if you click through and make a purchase. Community content is available under CC-BY-SA unless otherwise noted.