“You might need a ladder to get him down. I've always wanted to play snakes and ladders!”
―Edward

October 28th, 1998
Snakes and Ladders! is a read and colour magazine story.

Once a week, Edward pulls a special goods train full of supplies for the Sodor Zoo. Goods trains do not usually stop at passenger stations, but one day Edward has to pick up two passengers who are going to the zoo; a snake and his handler. The handler assures everyone that the snake is harmless and they put the snake, in its basket, into one of Edward's wagons. Unfortunately, the guard inadvertently breaks the catch on the snake's basket as he puts him in the wagon.

At the zoo, the handler is surprised to find that the snake is missing. A frantic search of the train begins. Suddenly, Edward calls out; he has found the snake (or rather the snake has found him). It is coiled around Edward's warm funnel. Edward jokes that they will need a ladder to get him down and that he always wanted to play "snakes and ladders". 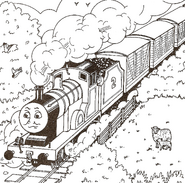 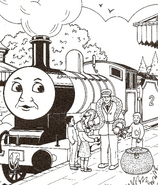 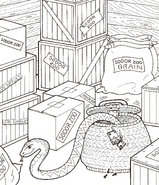 Add a photo to this gallery
Retrieved from "https://ttte.fandom.com/wiki/Snakes_and_Ladders!?oldid=1494302"
*Disclosure: Some of the links above are affiliate links, meaning, at no additional cost to you, Fandom will earn a commission if you click through and make a purchase. Community content is available under CC-BY-SA unless otherwise noted.