“It's my turn to play snowballs!”
―Thomas

Snow Play is a magazine story.

Thomas pushes the snow aside easily with his snowplough in the countryside. He meets Terence, ploughing snow off the road and into heaps. Terence says that his caterpillar tracks are better in the snow than Thomas' wheels. Thomas is sure that he could shovel snow as well as Terence. That moment, they both see children playing loudly, throwing snowballs at each other. Both Thomas and Terence agree that it looks like tremendous fun. Then playful Terence has an idea; he deliberately bumps into a tree, causing snow to fall onto Thomas. Terence laughs.

Later, Thomas crosses over a bridge and pushes a heap of snow over the bridge and onto Terence, who was clearing snow on the road below. 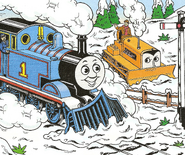 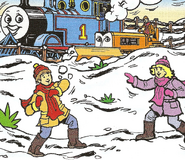 Add a photo to this gallery
Retrieved from "https://ttte.fandom.com/wiki/Snow_Play?oldid=1070093"
*Disclosure: Some of the links above are affiliate links, meaning, at no additional cost to you, Fandom will earn a commission if you click through and make a purchase. Community content is available under CC-BY-SA unless otherwise noted.