“That fooled you!”
―Bridgett Hatt to her brother

One snowy day, Stephen sees a trail of footprints in the snow. He decides to follow them to see where they lead. Stephen follows the trail and stares in surprise at what he finds. The trail leads to a snowman with a hat and a beard made of twigs. Then, Bridget suddenly appears and tells her brother that she has fooled him. 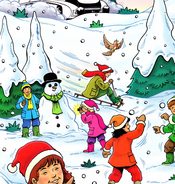 Add a photo to this gallery
Retrieved from "https://ttte.fandom.com/wiki/Snow_Surprise?oldid=1731879"
*Disclosure: Some of the links above are affiliate links, meaning, at no additional cost to you, Fandom will earn a commission if you click through and make a purchase. Community content is available under CC-BY-SA unless otherwise noted.