“Engines aren't as useful as me in very thick snow!"
"What a cheeky chopper! One rescue and his head's in a spin!”
―Harold and Henry

Snow Trouble! is a magazine story.

The Fat Controller had driven up to Top Station to inspect the narrow gauge engines. On his way home, it began to snow so hard that the Fat Controller could hardly see where he was going. The conditions soon became worse and the Fat Controller had to pull into a lay-by and wait for the blizzard to pass. Soon, his car is nearly buried in the snow. The stationmaster at the Main Station is getting worried and as soon as it stops snowing, he rings the airfield. Harold is soon looking for the Fat Controller's car. He finds it and Sir Topham Hatt and airlifts the controller to safety.

At the Main Station, Sir Topham Hatt thanks Harold. This causes Harold to boast that he is more useful than the engines in the snow which, understandably, annoys the engines. Soon, Harold is in trouble himself; he is running low on fuel. When Henry hears the news, he has an idea and is soon fitted with a snowplough to head to the rescue. When he arrives, Harold lands on Henry's flatbed and they set off. Harold is very grateful. 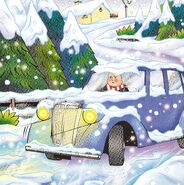 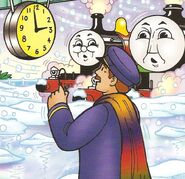 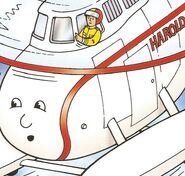 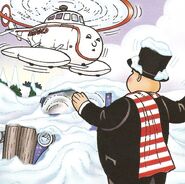 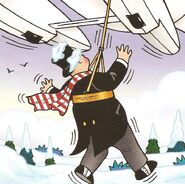 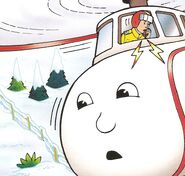 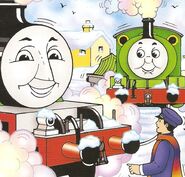 Add a photo to this gallery
Retrieved from "https://ttte.fandom.com/wiki/Snow_Trouble!?oldid=1095223"
*Disclosure: Some of the links above are affiliate links, meaning, at no additional cost to you, Fandom will earn a commission if you click through and make a purchase. Community content is available under CC-BY-SA unless otherwise noted.