Sodor's Legend of the Lost Treasure

Sodor's Legend of the Lost Treasure is a Golden Book based on the special of the same name.

Buried treasure, a lost ship, and a wily modern-day pirate are the exciting elements of a brand-new Thomas & Friends movie, “Sodor’s Legend of the Lost Treasure”. This Little Golden Book retelling will thrill train-obsessed little boys and girls ages 2 to 5. 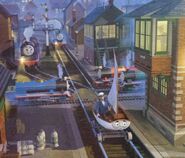 Add a photo to this gallery
Retrieved from "https://ttte.fandom.com/wiki/Sodor%27s_Legend_of_the_Lost_Treasure_(book)?oldid=1920220"
*Disclosure: Some of the links above are affiliate links, meaning, at no additional cost to you, Fandom will earn a commission if you click through and make a purchase. Community content is available under CC-BY-SA unless otherwise noted.