In 1923, the Peel Godred Power Company, a subsidiary of the British Aluminium Company, was formed to build a dam and hydro-electric power station utilising the waters of the three lakes, Corloey, Dubbyn Moar and Loey Machan. A standard gauge railway was needed to transport their bulky equipment, so the company negotiated with the North Western Railway to build a branch line from Killdane to Peel Godred, for which the company paid half the costs and supplies the current for its fleet of electric locomotives. The Power Company initially considered using the Mid Sodor Railway, and while port facilities at Arlesburgh were adequate, the slim clearances on the Mountain Road proved an insuperable obstacle. [1]

Three years later, in 1926, the Sodor Aluminium Company was formed to own and operate the Power Company, and also the Aluminium Works that was being built at Peel Godred. Beyond the town station and goods yard, the line continues for a mile or so before fanning out into the sidings at the Aluminium Works. Alumina is brought from Tidmouth to here, where it is processed into ingots before being sent to the Mainland via Barrow-in-Furness. [2]

In 1947, the company bought Falcon and Stuart from the closed Mid Sodor Railway to assist in an expansion project at the Aluminium Works. This was completed in 1951, and the two engines, after standing sheeted under tarpaulins for the better part of a year, were sold in 1952 to Sir Handel Lloyd Brown for the Skarloey Railway at the knockdown price of £25 each. [3] 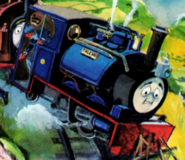 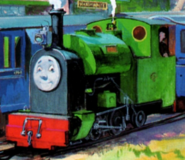 Peel Godred Branch Line
* RWS only | ** T&F only
Русский
*Disclosure: Some of the links above are affiliate links, meaning, at no additional cost to you, Fandom will earn a commission if you click through and make a purchase. Community content is available under CC-BY-SA unless otherwise noted.
Advertisement