“This pop concert must be good, it's even got the Fat Controller dancing!”
―Gordon

One summer's day, after the morning rush, Henry asks Gordon if he has seen the poster about the concert that evening called "Sodor Goes Pop". Gordon says he does not like pop music, but James thinks it is a great idea and smart engines like him are sure to be involved.

On his way to the Harbour, James sees Lorry 1 and Lorry 2 at a level crossing. They tell James they are on special business, but James doubts it. Lorry 1 tells James that pop concerts do not just happen, they need "roadies" like them to transport the equipment.

At the Harbour, the quayside is crowded with fans. A man in a fireman's uniform makes his way to James' cab. The mystery fireman is pop-star Danny Day in disguise, trying to avoid the crowds.

While James secretly takes Danny Day to the festival site, Thomas arrives at the airfield just in time to see Harold land. Harold has brought the band known as "The Sherbets".

By early evening, large crowds have gathered at the festival site and some visitors have set up tents in the next field. At seven o'clock, Restless Eric from Radio Sodor declares the show open and Danny Day takes the stage. As the concert begins, all the engines watch from the siding. Gordon admits the pop concert must be good as even the Fat Controller is dancing. 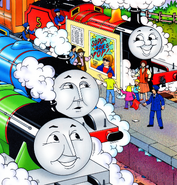 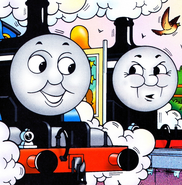 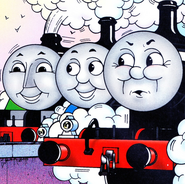 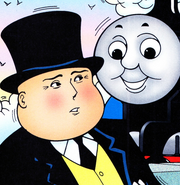 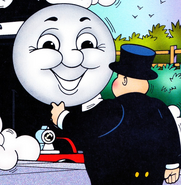 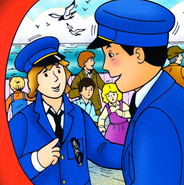 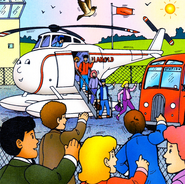 Add a photo to this gallery
Retrieved from "https://ttte.fandom.com/wiki/Sodor_Goes_Pop!?oldid=1240819"
Community content is available under CC-BY-SA unless otherwise noted.