Peel Godred Branch Line
The Sodor Power Station is responsible for producing all of the electricity on the Island of Sodor.

In the magazines, Little Barford runs on a narrow gauge line near the power station. Murdoch once had to deliver coal there when the power station ran out causing a blackout in the 2004 magazine story, Blackout!

The Sodor Power Station is situated on the Peel Godred Branch Line, near the Aluminium Works.

In 1923, the Peel Godred Power Company was established as a subsidiary of the British Aluminium Company to build a hydroelectric dam harnessing the power of the three lakes: Corloey, Dubbyn Moar and Loey Machan. They were also responsible for funding half of the construction of the Peel Godred Branch Line (with the North Western Railway funding the other half) in order to transport bulky equipment to their site, as the Mid Sodor Railway's small size would be inadequate for the task.

Little Barford
Add a photo to this gallery

The power station in the tenth series

The power station in a magazine story 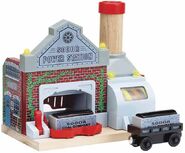 TrackMaster Power Station
Add a photo to this gallery
Retrieved from "https://ttte.fandom.com/wiki/Sodor_Power_Station?oldid=1733088"
*Disclosure: Some of the links above are affiliate links, meaning, at no additional cost to you, Fandom will earn a commission if you click through and make a purchase. Community content is available under CC-BY-SA unless otherwise noted.