South of Ballahoo, Island of Sodor

The Sodor River Bridge is a stone arch bridge that is located south of Ballahoo, over the River Hoo, on the Norramby Branch Line.

Once, the Sodor River Bridge had to be rebuilt. Stanley transported workmen to and from the construction site, Rocky assisted in building the bridge, while Thomas transported the specially made bricks. During Thomas' last trip to the site, his brakes became faulty and he lost most of the bricks when he ran across a bend at high speed and crashed into some buffers. Thomas' brakes were completely broken by the time he had reached the bridge, and he almost ran straight off it, losing the last of the bricks in the process. Thomas, Stanley, Rocky, and Murdoch went back along the route Thomas' had taken and were able to find all the lost bricks, allowing the River Bridge to be completed by the end of that day.

The bridge has five arches and is double-tracked.

The new Sodor River Bridge being rebuilt by Rocky

Thomas derails on the bridge 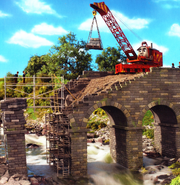 Add a photo to this gallery
North Western Railway
* RWS only | ** T&F only | --- Dropped
Norramby Branch Line
* RWS only | ** T&F only
Retrieved from "https://ttte.fandom.com/wiki/Sodor_River_Bridge?oldid=1754754"
*Disclosure: Some of the links above are affiliate links, meaning, at no additional cost to you, Fandom will earn a commission if you click through and make a purchase. Community content is available under CC-BY-SA unless otherwise noted.