The Sodor Steamworks is a large repair company that specialises in fixing steam engines. It is situated along the Main Line at Crovan's Gate. It replaced The Works at the start of Hero of the Rails. The Steamworks is accessible and used by the steam engines on both the North Western and Skarloey Railways. All of the essential components for steam locomotives are kept and made here. Heavy overhauls are also carried out here. Victor and Kevin both live and work here at the Sodor Steamworks.

The company's logo consists of a chimney with steam coming out and is surrounded by a large cog wheel. Victor, Kevin, numerous rolling stock, vehicles and staff uniforms, all have this logo on their livery and appearance. 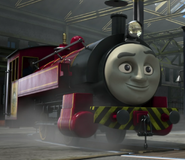 Kevin
Add a photo to this gallery

Equipment at the Steamworks includes:

Skarloey Railway
* RWS only | ** T&F only
The Main Line
* RWS only | ** T&F only
Retrieved from "https://ttte.fandom.com/wiki/Sodor_Steamworks?oldid=1776102"
*Disclosure: Some of the links above are affiliate links, meaning, at no additional cost to you, Fandom will earn a commission if you click through and make a purchase. Community content is available under CC-BY-SA unless otherwise noted.