The Sodor Tramways had a fleet of steam trams that used to work on its line.

In earlier years, the tram engines served Great Waterton and other nearby villages. However, as road traffic increased, traffic on the Sodor Tramway decreased, and it was closed down. After the rediscovery of Great Waterton, Toby discovered the old tram sign and the Sodor Tramway Company was reopened[1]. Flora, a new steam tram, was then purchased to run the line[2].

No descriptions were given about these engines, about how many of them there were or what eventually happened to them. It is assumed they were scrapped, since prior to Flora's arrival, Toby was referred to being the only steam tram (and later the oldest) on Sodor.

The tram engine in the sign is based on the GER Class C53 0-6-0T Wisbech steam tram (reclassified as J70 by the LNER) built at Stratford Works. Twelve were produced. Toby and his brothers share the same basis.

The GER also had smaller 0-4-0 counterparts, the GER Class G15 (reclassified as Y6 by LNER). Ten were produced.

None of these trams survived preservation and have all been scrapped. 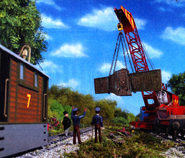 Other Sudrian railways
* RWS only | ** T&F only
Stepney's Branch Line
Español
*Disclosure: Some of the links above are affiliate links, meaning, at no additional cost to you, Fandom will earn a commission if you click through and make a purchase. Community content is available under CC-BY-SA unless otherwise noted.
Advertisement