“A day's holiday is not to be sniffed at!”
―James

Something Fishy is a magazine story.

The Tidmouth stationmaster has lost his pet cat, Tiger. He tells the engines that a passenger saw the cat get on a train so he could be anywhere now. He also tells them that the Fat Controller has agreed that the engine who finds him will get a day's holiday. James, Percy and Thomas all agree to keep an eye out for Tiger.

James is sent to collect fresh fish from the docks to take to market. The fish are loaded into James' trucks, but one fish misses the truck and falls into James' tender. It then disappears beneath his coal.

A few days later, James passes Thomas at a signal. Thomas wonders what smells so horrible, but James can't smell anything. Thomas is sure the nasty pong is coming from James.

The next day, at the wash-down, Percy insists that James goes first because he smells so bad. James is annoyed, he doesn't think he's dirty or smelly.

By the following week, the smell is so disgusting that James is sent out of the main station. The Fat Controller tells him not to return until the smell has gone. The big red engine puffs out into the countryside as his driver wonders what the smell could be. Suddenly, there is a rustling coming from a tree beside the track. A cat suddenly jumps into James' tender and starts licking his lips. James is excited; it's Tiger, the stationmaster's missing cat. The cat is drawn to the mysterious smell coming from James' tender. Tiger starts digging through the coal until the fireman pulls out the fish that had fallen in.

James takes the cat straight to Tidmouth and returns him to the stationmaster. James' driver is just as happy as the stationmaster now that the smell has gone and James says it is all thanks to Tiger. The Fat Controller keeps his word and gives James, and his crew, a day off for finding the lost cat. 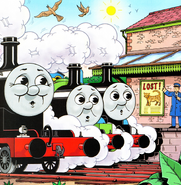 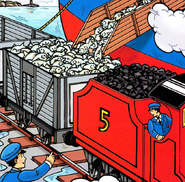 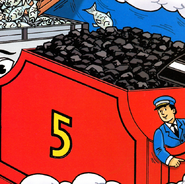 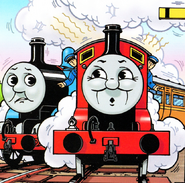 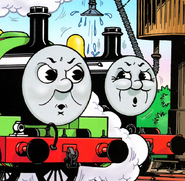 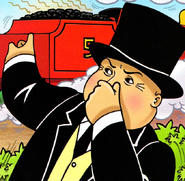 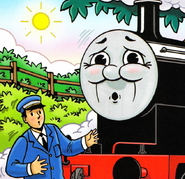 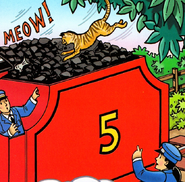 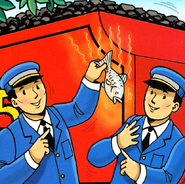 Add a photo to this gallery
Retrieved from "https://ttte.fandom.com/wiki/Something_Fishy_(magazine_story)?oldid=1690027"
Community content is available under CC-BY-SA unless otherwise noted.