“Did I ever tell you about the time...?"
"No and it's too cold to stand and listen to your stories!"
"Suit yourself!”
―Salty and Percy

Sparks Fly is a magazine story.

It is cold day down at the docks and Percy is working with Salty and Cranky. Percy waits while Cranky loads straw bales into his trucks. As Salty rolls away with his goods train, sparks from his funnel fly into the air and drop into a hay truck. Suddenly, the trucks starts smoking and then hot flames flicker as the frightened truck yells in alarm. Salty has already left, unaware of the trouble he has caused. A docker races to telephone for the fire brigade, but Cranky says they will not arrive in time. Percy decides there is only one way to extinguish the fire and save the truck. Percy shoves the truck as hard as he can. The truck whizzes right off the end of the dock and into the water. The fire is out in seconds, but an enormous wave of cold water soaks Percy. Before the truck can sink, Cranky lifts it out of the water and lowers the cold, but grateful truck onto the dockside.

The next morning, the Fat Controller gathers his engines in the main station yard and declares three cheers for Percy. Even the trucks join in and Percy has never felt so good in his life. 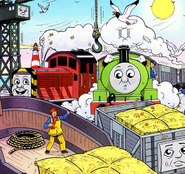 Add a photo to this gallery
Retrieved from "https://ttte.fandom.com/wiki/Sparks_Fly?oldid=1239034"
*Disclosure: Some of the links above are affiliate links, meaning, at no additional cost to you, Fandom will earn a commission if you click through and make a purchase. Community content is available under CC-BY-SA unless otherwise noted.