Special Carriage is a magazine story.

Spencer is waiting at the main station, coupled to his coaches and dining car; he is taking the Duke and Duchess of Boxford on a tour of the Island. As the Fat Controller, the Duke, and the Duchess board Spencer, Thomas and S.C. Ruffey watch jealously; they will never carry such important passengers. S.C. Ruffey usually works with Oliver, so Thomas is surprised when he finds out that he is to pull the truck that day.

Meanwhile, Spencer is enjoying himself enormously. That is until he comes across a landslide. His driver tells the important passengers that there will be a long delay while the train reverses. However, the Duchess spots Thomas and S.C. Ruffey pulling up on a nearby track. She tells Sir Topham and the delighted Duke that they could take an open-air trip in the truck to the next station where they can board another passenger train. Spencer is very embarrassed, but Thomas and S.C. Ruffey, who behaved all the way, could not have been prouder. 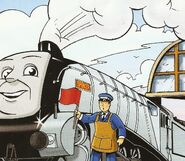 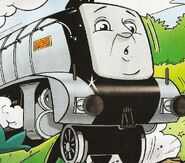 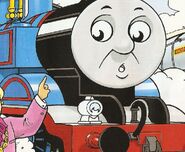 Add a photo to this gallery
Retrieved from "https://ttte.fandom.com/wiki/Special_Carriage?oldid=1582367"
Community content is available under CC-BY-SA unless otherwise noted.