A Better View for Gordon (T&F)

The coaches were later pulled by Spencer for private usage of the Duke and Duchess of Boxford.

They appear to be based upon MK1 Suburban carriages without corridors.

The coaches were painted maroon with silver buffers, grey roofs and red lining, bufferbeams and couplings.

A coach on a turntable

Two coaches being pulled by James

The special express coaches' basis
Add a photo to this gallery 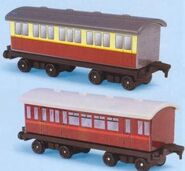 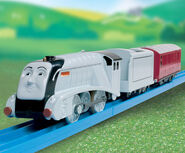 Capsule Plarail
Add a photo to this gallery
North Western Railway
* RWS only | ** T&F only | --- Dropped
Retrieved from "https://ttte.fandom.com/wiki/Special_Express_Coaches?oldid=1717505"
*Disclosure: Some of the links above are affiliate links, meaning, at no additional cost to you, Fandom will earn a commission if you click through and make a purchase. Community content is available under CC-BY-SA unless otherwise noted.