Last Train for Christmas (Thailand)
Marion and the Pipe (China)

Marion and the Dinosaurs (China)

Spencer's VIP is a Chinese/Thai DVD featuring five episodes from the eighteenth series.

When Spencer brings a Very Important Passenger from the mainland, he is so determined to be on time that he doesn't notice he's been sent down the wrong track. By the time he arrives at Knapford, he is very late indeed and the V.I.P. refuses to travel back with him. The other engines all compete to be chosen to take the V.I.P. back to the mainland, but rushing to do things quickly and showing off, only leads to confusion and delay. And Spencer ends up being given a second chance. 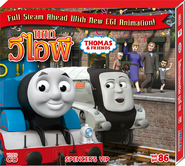 Thai VCD
Add a photo to this gallery
Retrieved from "https://ttte.fandom.com/wiki/Spencer%27s_VIP_(Chinese_DVD)?oldid=1863089"
*Disclosure: Some of the links above are affiliate links, meaning, at no additional cost to you, Fandom will earn a commission if you click through and make a purchase. Community content is available under CC-BY-SA unless otherwise noted.