“I'm the fastest and finest engine on Sodor!”
―Spencer

Spencer is a book in the Engine Adventures series.

Gordon is excited because a Duke and Duchess are coming to Sodor. Gordon hopes that he will be chosen to take them around the island, but the Duke and Duchess arrive on board their own private engine called Spencer. There is to be a party for the Duke and Duchess at Maron. Spencer will have to climb Gordon's Hill to get there. Gordon warns Spencer to fill up with water before the journey, but Spencer insists that he has plenty of water and steams away.

When Spencer starts to climb Gordon's Hill, he finds himself running out of steam. His driver phones for help and the stationmaster sends Gordon to help Spencer. Soon, Gordon is coupled up to the Spencer and pulls the sleek steam engine all the way to Maron Station, just in time for the party. The Fat Controller praises Gordon.

The next day, Spencer is feeling very smug because his driver has told him that he is even faster than Gordon. The Fat Controller's engines are very cross. Spencer is taking the Duke and Duchess to their summer house and the Fat Controller needs another engine to take their furniture. All the engines want the chance to race speedy Spencer, but the Fat Controller gives the job to steady old Edward.

Edward sets off slowly and steadily and Spencer easily takes the lead. Edward's train is very heavy, but he feels better when he sees Donald and Douglas cheering him on. At the bottom of a hill, the Duke and Duchess have stopped to take photos and Spencer has fallen asleep. When Spencer opens his eyes, he is surprised to see Edward in the lead. Spencer races after Edward, but he is too late to stop Edward winning the race. Edward feels like the pride of the railway, but Spencer feels very silly. 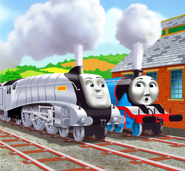 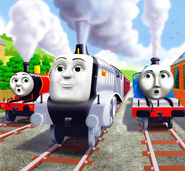 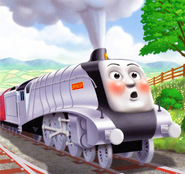 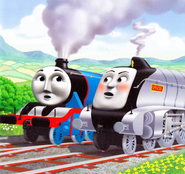 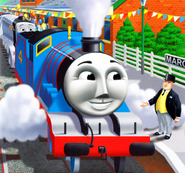 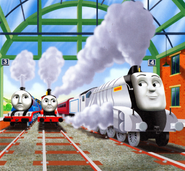 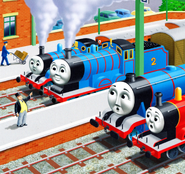 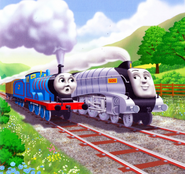 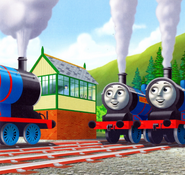 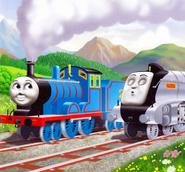 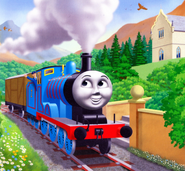 Add a photo to this gallery
Retrieved from "https://ttte.fandom.com/wiki/Spencer_(Engine_Adventures)?oldid=1644309"
*Disclosure: Some of the links above are affiliate links, meaning, at no additional cost to you, Fandom will earn a commission if you click through and make a purchase. Community content is available under CC-BY-SA unless otherwise noted.