Spotty Thomas is a magazine story.

One day, the Fat Controller announces that Sodor is getting a new Mayor and Thomas is to take him around Sodor when he arrives next week. Thomas is thrilled to be chosen as he will get to pull the Mayor's colourful carriage. Thomas promises he will look his best for the special honour.

Early next morning, Thomas stops at a signal to let Emily pass. Emily points out that Thomas has a big spot on his dome, but assures him does not notice very much.

Before long, Thomas gains more spots and Diesel laughs at him, saying it looks like Thomas has measles. Thomas hopes none of the other engines see him in such a state; they are bound to laugh and tease him. Unfortunately for Thomas, James speeds past on the main line and says he cannot stop in case the spots are catching. Thomas insists he is not well and the driver knows what is wrong with him. The driver tells Thomas that he is covered with rust spots and he will need to be repainted. Because of this, the Fat Controller informs Thomas that he will not be able to pull the Mayor's carriage. Poor Thomas feels like he's let everyone down - especially as the job is given to James.

It is the day of the Mayor's arrival, but he brings bad news. The Mayor is covered with spots and has to reschedule the tour until he is better. Thomas is pleased because it looks like he will get the take the Mayor after all. Just then, the Fat Controller notices a rust spot on James' paintwork and tells him he needs a new coat of paint, too.

A few days later, Thomas is taken to the paint shop to have his rust spots rubbed away before a fresh coat of blue paint is applied. He comes back looking brighter and shinier than ever. The Mayor also feels better so, at long last, the tour can go ahead. Smiling happily, Thomas pulls the colourful carriage around all the towns and villages of Sodor. As the grand parade pulls into view, the Fat Controller shouts out to praise Thomas for doing his railway proud.

Meanwhile, James watches from the sheds. He is now covered in rust spots just like Thomas was. He apologises to Thomas for calling him names and he is now paying the price for his actions. 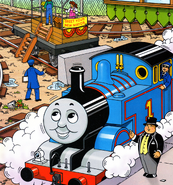 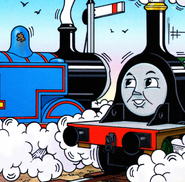 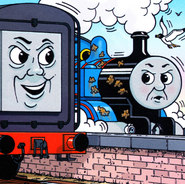 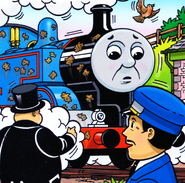 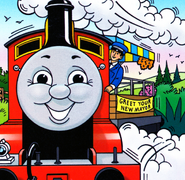 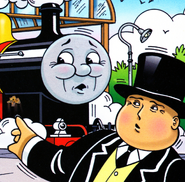 Add a photo to this gallery
Retrieved from "https://ttte.fandom.com/wiki/Spotty_Thomas?oldid=1696374"
*Disclosure: Some of the links above are affiliate links, meaning, at no additional cost to you, Fandom will earn a commission if you click through and make a purchase. Community content is available under CC-BY-SA unless otherwise noted.